How a Culinary Legacy Was Born From a Simple Recipe 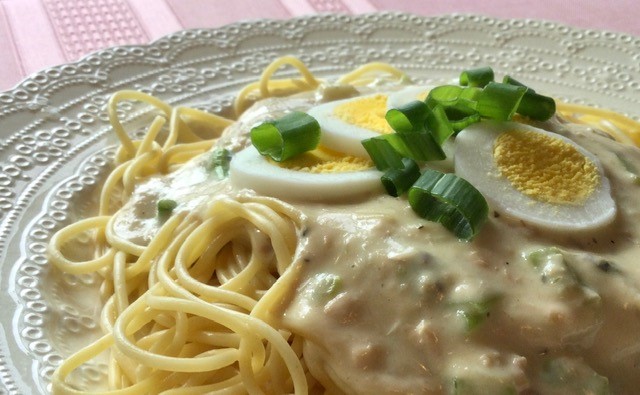 Invented by a Busy Mom

The story happened when my two daughters, Juny and Kit4, were young teenagers. Now old enough to leave them home alone, my husband and I had gone on a short trip. The overprotective mother in me was a bit panicked when our princesses called the first night. Quickly reassured about the purpose of their call, I burst out laughing. They were looking for a recipe. Spaghetti with salmon, the one I had been cooking for them since they were little.

“We’ve been digging around, Mom,” one of them said.

I laughed because this famous secret was buried deep in my head. One day, I invented it in panic. I made this dish from the only cans left in the pantry! As any working mother can be, I was stuck and couldn’t go to the grocery store.
In the end, this sauce wasn’t so disagreeable. It had saved my life many times!

I then remembered the story of a friend of mine. She told me her mother had died suddenly at a young age. She had taken her recipe for macaroni salad to her grave. My friend and her sisters experimented, in vain, for several years to reproduce the same old taste. I realized the importance of writing down all my recipes to pass on to my children.
I’m sure you remember a recipe your mother used to cook for you as a child.

I will show you how to make this delicious salmon spaghetti in no time!
My sister often says, “Why make it simple when you can make it complicated?”
There is a more sophisticated way to cook it. Yes, sometimes it’s fun to try something more elaborate. In the future, I will reveal the other version.

In the salmon, you will notice some bones. Smash them and mix them with the salmon meat. It is full of calcium. Excellent for your health.

One commercial cream of celery soup ±284 ml
½ can of milk (use the can of cream of celery)
One can of salmon 213 g
One green onion, chopped
½ stalk of celery, chopped
Spaghetti for four portions cooked
One tablespoon of olive oil
One hard-boiled egg
Salt and pepper to taste
Reserve a few pieces of green onion for final decoration.

Here are the ingredients you need. You always have commercial cream of celery, canned salmon, pasta in the pantry.
That’s the basis for this recipe.
The egg is for the final topping. If we have some onion and celery left over for extra flavour, that’s fine but not essential.

Fry the green onion and celery in olive oil for 2 to 5 minutes.
Mash the salmon and add it.
Add the can of cream of celery.
Add ½ can of milk.
Mix well until simmering.
Pour over pasta. Garnish with green onion and sliced egg.

Dear parents, always write down your favourite recipes, it is treasures of family memories.

This website uses cookies to enhance your experience when browsing the site. Of these cookies, those that are categorized as necessary are stored on your browser because they are also essential for the operation of basic website functionality. We also use third-party cookies that help us analyze and understand how you use this website. These cookies will only be stored in your browser with your consent. You also have the ability to decline these cookies. But disabling some of these cookies may affect your browsing experience.

Necessary Always Enabled
Necessary cookies are absolutely essential for the website to function properly. These cookies ensure basic functionalities and security features of the website, anonymously.
Advertisement
Advertisement cookies are used to provide visitors with relevant ads and marketing campaigns. These cookies track visitors across websites and collect information to provide customized ads.
Analytics
Analytical cookies are used to understand how visitors interact with the website. These cookies help provide information on metrics the number of visitors, bounce rate, traffic source, etc.
Functional
Functional cookies help to perform certain functionalities like sharing the content of the website on social media platforms, collect feedbacks, and other third-party features.
Others
Other uncategorized cookies are those that are being analyzed and have not been classified into a category as yet.
Performance
Performance cookies are used to understand and analyze the key performance indexes of the website which helps in delivering a better user experience for the visitors.
SAVE & ACCEPT