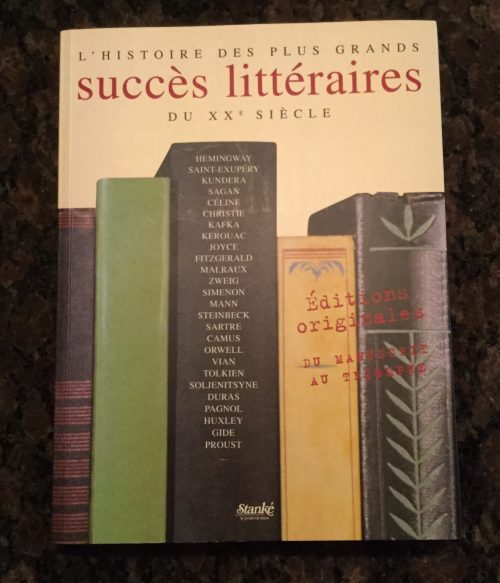 I chose to talk to you about Edith Wharton because I like to read the works of American women novelists.  I discovered her in this book offered by my sister or my parents during one of my birthdays.

Who is Edith Wharton?

First of all, she was born in New York in 1862 and died in France at the age of seventy-five. Her family belonged to the New York high society; her maiden name is Edith Newbold Jones. She spent a large part of her childhood in Europe.

In 1885 she married Mr. Wharton, twelve years her senior and from the same background.

In 1902, she moved to The Mount, to the house that the couple had built in Lenox, Massachusetts.

In 1903, she returned to Europe, where she met Henry James, a naturalized British American author, in England. They were on good terms until James’ death. Henry made several visits to Edith’s home in Lenox where they went, with other writer friends, for long drives in the green hills of Berkshire.

Mr. Wharton’s many infidelities put a strain on the marriage. And, after the decline in his mental health, Edith divorced in 1913. They had no children.

She then moved to France, where she bought a house near Paris. Following her installation, she met Theodore Roosevelt, Paul Bourget, André Gide and Jean Cocteau.

She received the Pulitzer Prize in 1921 for “Time of Innocence” published a year earlier. It was the first time that this prize, awarded to a woman. Edith Wharton was also the first to be made an honorary doctor at Yale University.

“The Letters” is the story of a young girl who falls in love. It is a short novel of ninety-two pages, or maybe we should say a short story. I bought this book.

“In Paris, Lizzie West falls in love with Vincent Deering, the father of the little girl she teaches. Now a widower, Deering must return to the United States. The lovers promise to write to each other, but soon Lizzie receives no more letters. A few years later, she meets him by chance… “.

During these two or three years of separation, Andora Macy, a boarding school neighbour, befriends Lizzie West. She witnesses Lizzie’s distress when she has no news of Mr. Deering.

Then poor Lizzie becomes rich by receiving an unexpected inheritance following the death of her old uncle, who is very stingy. She is almost engaged to a Mr. Benn, a friend of her cousins. During lunch with them, she meets Mr. Deering.

A few days later, he asks her for an hour-long interview. They have a fierce discussion.

The writing takes us a few years later, where the young woman is married to Vincent Deering. They have a baby and live in Neuilly.  The famous Andora is always present in Lizzie’s life. Without revealing the details of the plot, Lizzie discovers the fabulous letters she sent to her Vincent a few years ago. She finds them in their original sealed envelope. Lizzie goes through a lot of emotions, especially since Andora is with her when she discovers them.

The genius of Edith Wharton

And that is the genius of the author: her ability to use words to describe, to make us feel the same emotions as her characters. I agreed with the editor.  He defines her “fine, penetrating analysis of the heart of a woman in love.”

I had read this book a few years ago and didn’t recall the ending. After this reread, I don’t know if it’s because I’ve been married a long time, but I will remember it.

P.S. For New England enthusiasts, you can visit The Mount, yes, Edith Wharton’s home in Lenox, Massachusetts.  I’ll tell you about it in another article about my travels with Brittany Brexit.

The publishers have not been made aware of this project.

This website uses cookies to enhance your experience when browsing the site. Of these cookies, those that are categorized as necessary are stored on your browser because they are also essential for the operation of basic website functionality. We also use third-party cookies that help us analyze and understand how you use this website. These cookies will only be stored in your browser with your consent. You also have the ability to decline these cookies. But disabling some of these cookies may affect your browsing experience.
Necessary Always Enabled
Necessary cookies are absolutely essential for the website to function properly. These cookies ensure basic functionalities and security features of the website, anonymously.
Advertisement
Advertisement cookies are used to provide visitors with relevant ads and marketing campaigns. These cookies track visitors across websites and collect information to provide customized ads.
Analytics
Analytical cookies are used to understand how visitors interact with the website. These cookies help provide information on metrics the number of visitors, bounce rate, traffic source, etc.
Functional
Functional cookies help to perform certain functionalities like sharing the content of the website on social media platforms, collect feedbacks, and other third-party features.
Others
Other uncategorized cookies are those that are being analyzed and have not been classified into a category as yet.
Performance
Performance cookies are used to understand and analyze the key performance indexes of the website which helps in delivering a better user experience for the visitors.
SAVE & ACCEPT